Toshi Island is the largest island of Toba city located in the northeast of the Toba harbor. Blessed with rich fishing grounds, a wide variety of fish and seafood are caught. Fishing by female divers reaches its peak during the period from spring to summer, while they catch fish and seashell including abalones, turban shells, and octopus, in addition to seaweed such as wakame, brown seaweed and arame seaweed. We visited the headquarters of Hamayo Honten based in Toshi island which has a long history since the middle of the Edo Period. There processed seafood such as Kurochirimen (dried whitebait) and tsukudani oysters are offered. We also had local dishes cooked on this island that have been passed down over generations. The staff members of Shima no Tabi-sha, Sachiko Hamaguchi and Chizuru Hamaguchi, kindly showed us how to cook these local dishes. Shima no Tabi-sha is an organization consisting of female divers and fishermen’s wives as island’s mothers to produce Toshi island tours. The purpose is for tourists to experience the attractiveness of this island. When requested, they entertain tourists with the local cuisine of Toshi Island as part of the Hands-on Female Diver Booth tour. 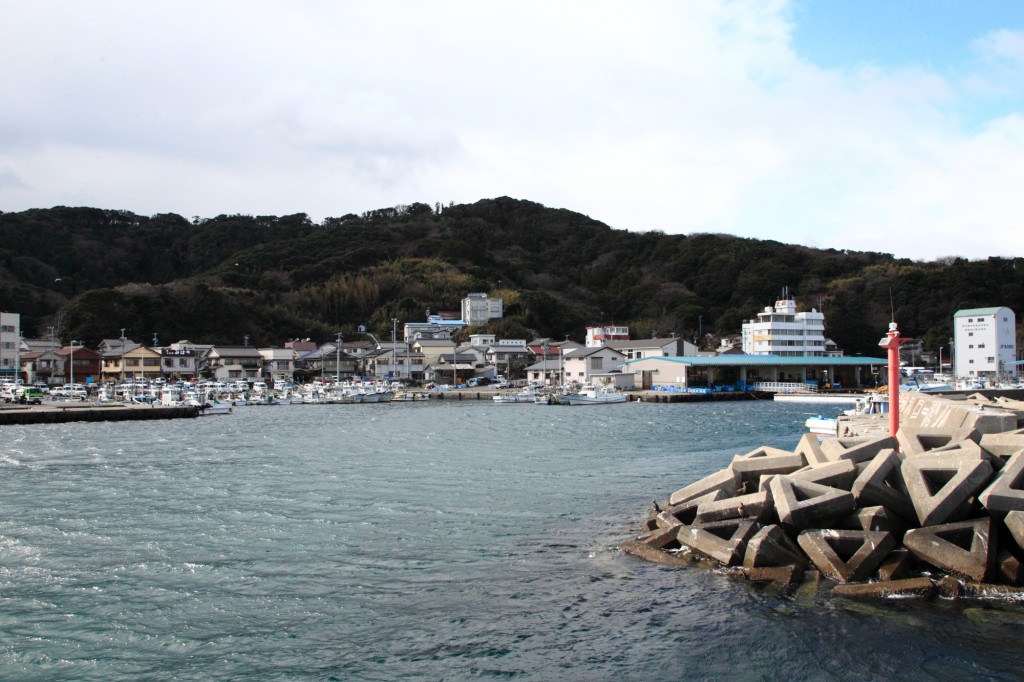 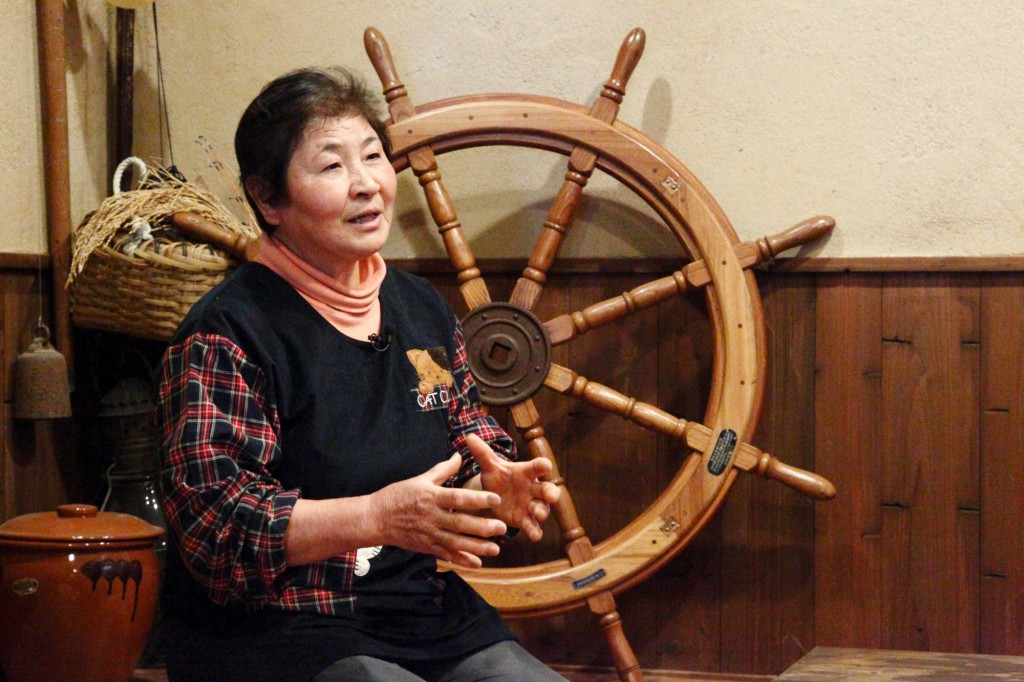 Japanese mixed rice dishes are the representative traditional dishes cooked by women. Concerning these rice dishes, their names are based on the seafood used, such as Tako-meshi (octopus rice) and Kaki-meshi (oyster rice). Inoke-meshi is a rice dish cooked by using Inokai seashells. Inoke is a modified form of Inokai. Inokai seashells live in rocky areas deep in the sea, so that only female divers who can dive deeper can harvest them. The meat of this seashell can remain soft even when heated. For this reason, this seashell has been loved by children and older people. Inoke-meshi rice dish is made by cooking rice with shucked Inokai shellfish, seasonal vegetables added, and then seasoned with soy sauce and sake. When rice is finished, plenty chopped leaks are added, and then rice is stirred well. “Inokai seashells are now quite precious since recently it has become difficult to catch. But previously, we used to be able to catch so many that we couldn’t hold them with both arms. So we had them in a wide variety of ways, of course with mixed rice dishes, by grilling, or adding them to rice and curry. Children used to have steamed Inokai seashell as their snack,” so said Hamaguchi. 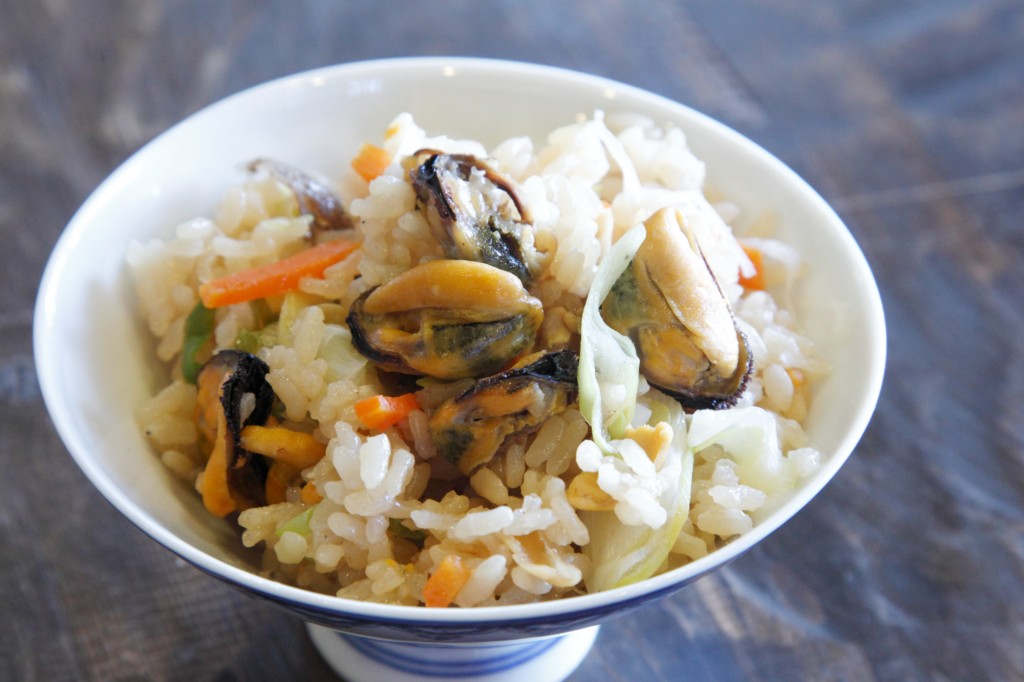 On remote islands such as Toshi Island, unique delicacies using fish caught at each fishing area have been passed on over generations. For example, Iwashi no arame-maki (sardines rolled with arame seaweeds) is a representative delicacy with a great combination of locally-caught sardines and arame seaweeds picked by female divers. Sardines, with their heads and offals removed, are rolled with three layers of watered arame seaweed. They are then simmered with soy sauce, sweetened sake, and sugar. Because the sardines used are fresh, you do not experience any fishy smell. Arame seaweed serves as food for abalones, which have been harvested quite a lot in and around Toshi Island. Arame seaweed is dried under the sun light and then boiled in a large pot until it becomes tender after several hours. Then it is dried under the sun light again for preservation. Drying them under the sun light many times increases mineral and nutritional value. It has been said that many islanders of Toshi Island live longer, because they eat many kinds of seaweed such as arame seaweed. 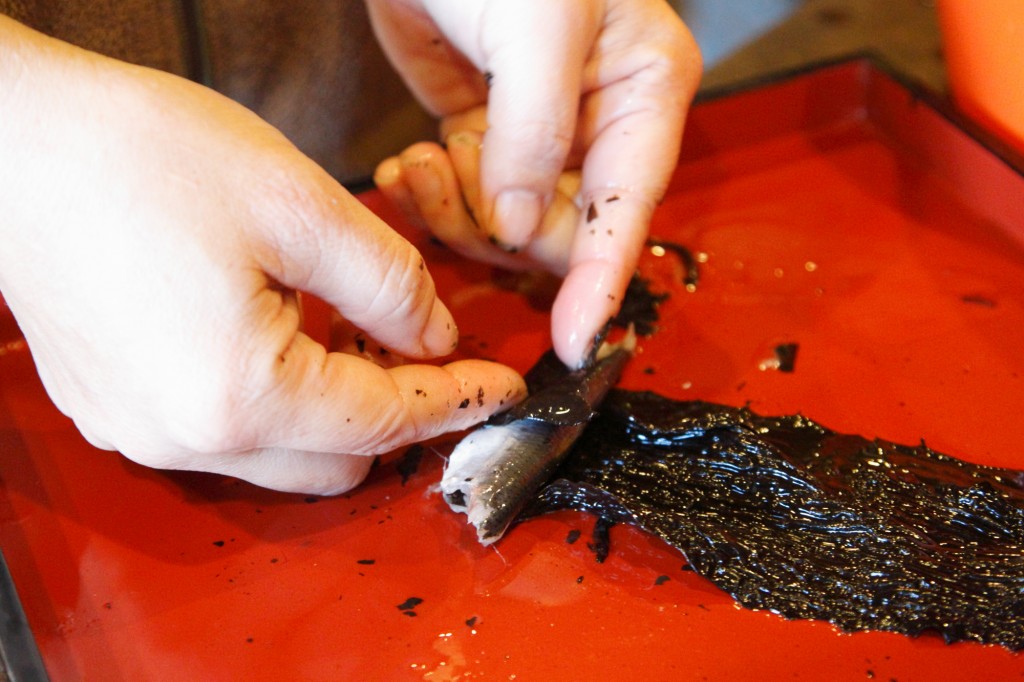 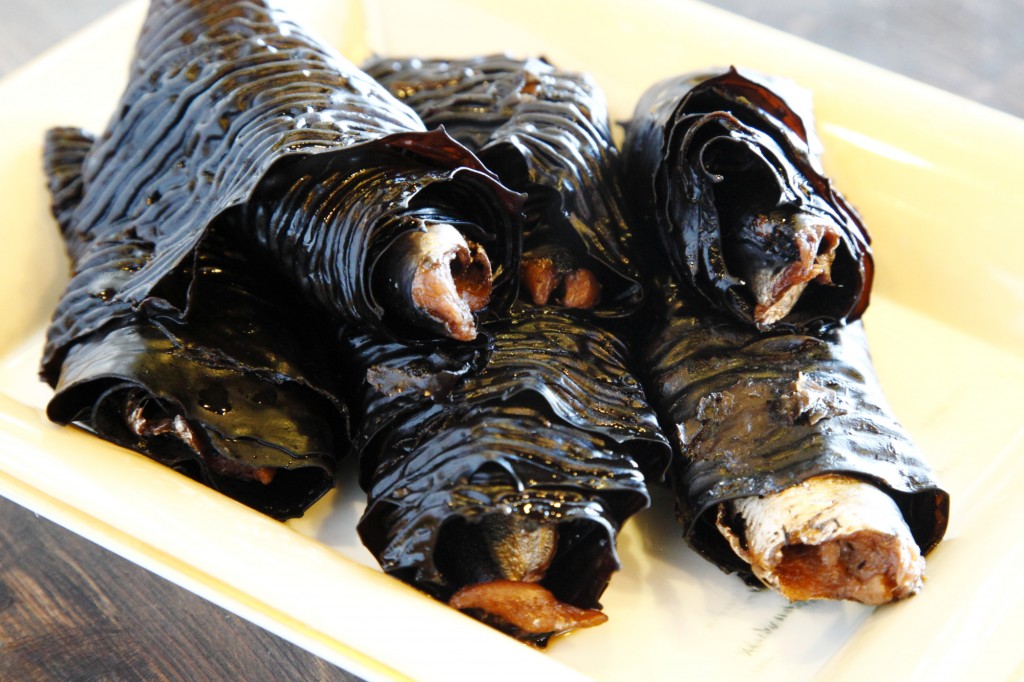 On Toshi Island where fishing by female divers is still active, many traditional dishes have been produced from female diver cuisine. Nimiso, simmered miso, is one of them. Female divers usually take a break and keep them warm inside their diver’s shack. Inside the shack there is a fire on an open hearth. They surround the hearth and eat this nimiso dish. This dish is very simple, cooked by simmering damaged seashell and fish along with vegetables brought from the home in a large pot. It is seasoned using miso paste and sugar. Hamaguchi said: “This is like seafood miso soup with a lot of fresh seafood. When I cook this dish for those from other prefectures, they often ask me where they can get this delicious miso paste. But you can use any miso. The point is the soup stock extracted from the fresh seafood. This soup stock makes this dish extraordinary even when using ordinary miso paste.” The freshness adds an excellent taste to this dish. Additionally, the miso paste can remove the unique fishy smell, while it goes well with any kind of fish. So there are many fish-related dishes based on using miso paste. 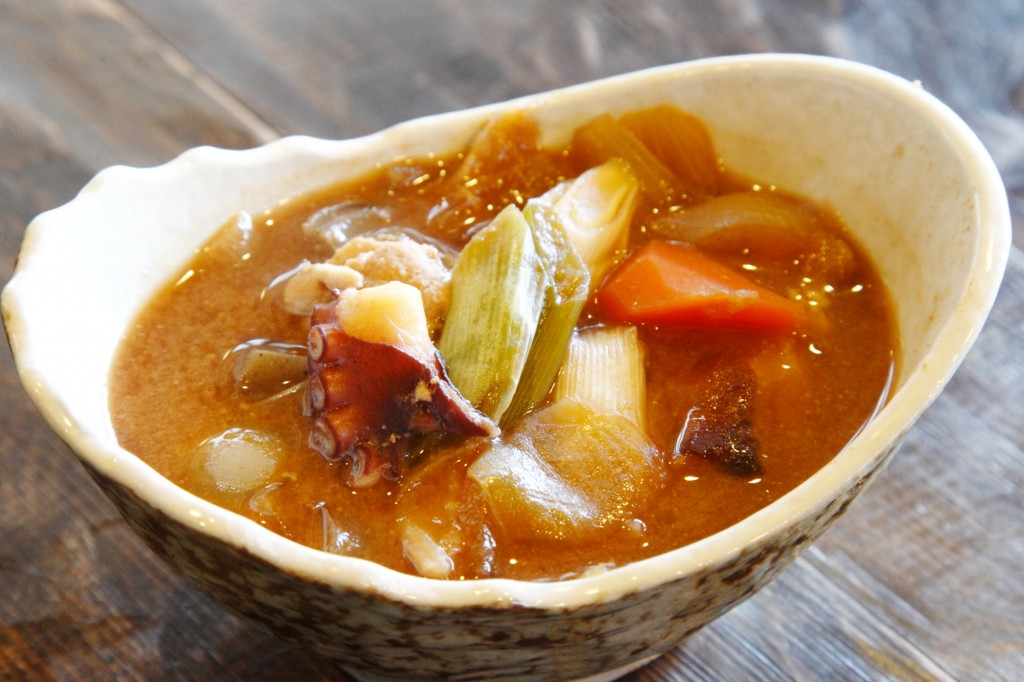 Furthermore, Nama-shirasu, raw shirasu bates, are also another specialty of the island, which are eaten in all homes when they are caught. You can have them only on the day when they are caught. It is often said that raw shirasu bates are on the tables all over the island during the period from spring to autumn. Serving them with vinegar miso paste is the manner used on Toshi Island. Additionally, in ceremonial and festival occasions including New Year’s Holidays, sushi dishes are always served, such as Hokkaburi zushi where vinegared rice is covered with vinegared sardine fillet. Focusing on sushi dishes, we headed for the Ise region in order to see an Iseshima’s representative traditional sushi, Tekone zushi. This sushi was selected as one of 100 traditional dishes of agricultural and fishing villages by the Ministry of Agriculture, Forestry and Fisheries. 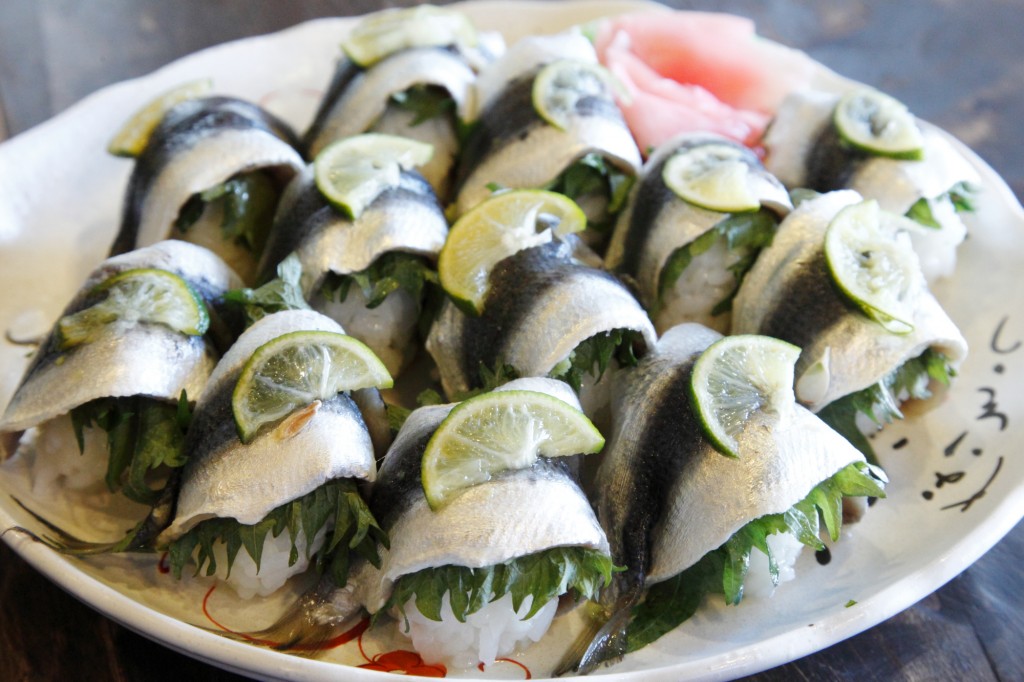 Hokkaburi zushi with sardine fillet on top of vinegared rice 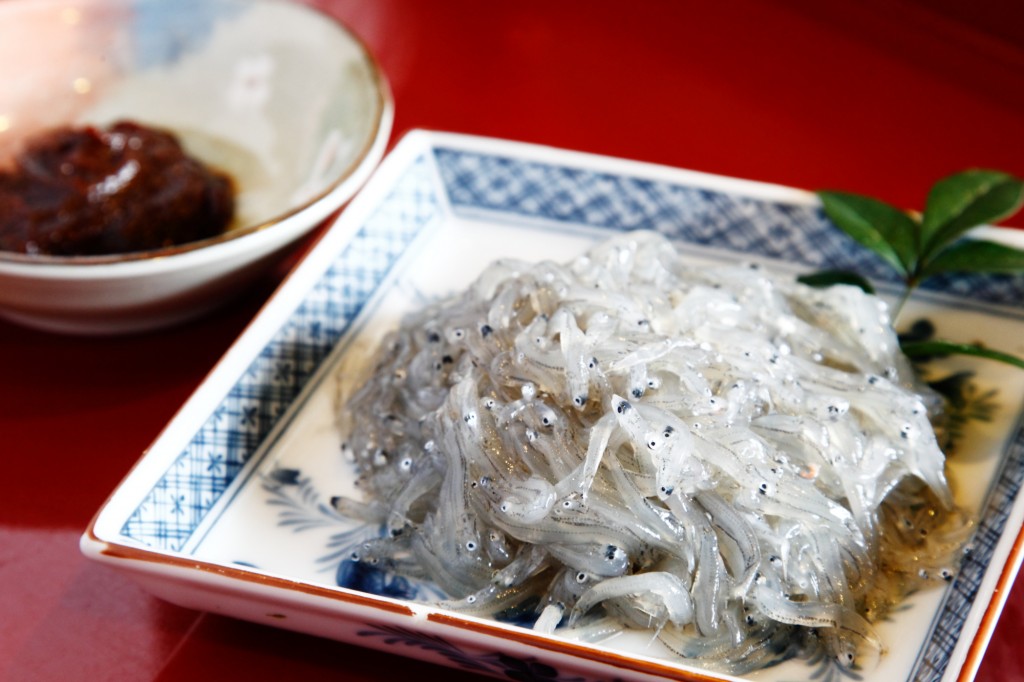 Nama-shirasu, raw shirasu bates, is a specialty of Toshi Island and essential food for Toshi islanders 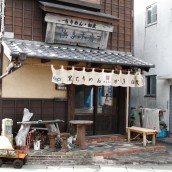