“The Delicious and Graceful Cuisine of Yamato”

More than a millennium ago, the area now known as Nara was called Yamato Province, which was celebrated as the kuni no mahoroba (“splendid land of the nation”). Yamato was the first province to have laid out the Miyako (capital city) style of development, and cultivated the sophisticated and rich cultures of its early years. The kyoudo ryouri of this region is typified by cha gayu (tea porridge) and kakino ha zushi (persimmon leaf-wrapped sushi), which are still deeply present in the daily lives of people of Nara – or Yamato, the name still very much associated to the area.

Whilst endeavouring to investigate the deep food culture of Yamato, we first visited the UNESCO World Heritage site, Yakushi-ji, a temple with 1,300 years of history. It is the head temple of the oldest Buddhist sect, Hosso, and there we asked the chief priest, Master Kato Chouin, about cha gayu (tea porridge).

“Yamato’s dawn breaks with cha gayu.” This is a common phrase around modern Nara. Cha gayu is a deeply-rooted breakfast staple for the ordinary people of the region. At the distinguished Yakushi-ji temple too, the menu retains the flavours of traditional culture that have been passed on through generations.

“From a very long time ago, people knew tea had medicinal benefits. So this porridge, rice stewed by tea instead of plain water, has been served in the mornings for centuries as a food that sanctifies your body and soul,” said Master Chouin. “It’s a Nara area traditional cuisine. We have the privilege of eating cha gayu together after the monks’ reading of sutras, which begins at five o’clock every morning. There are no formal rules of behavior for eating cha gayu other than chanting the phrases meant for before taking food. By paying respect to food and gaining calmness in our minds, we bring ourselves to be thankful for the new day that’s about to begin.”

In Yakushi-ji Temple, the Buddha’s teaching of how to live happily in this mortal world is taken seriously by the monks; perhaps cha gayu really is a medicine-like item they take every day for physical and mental harmony. 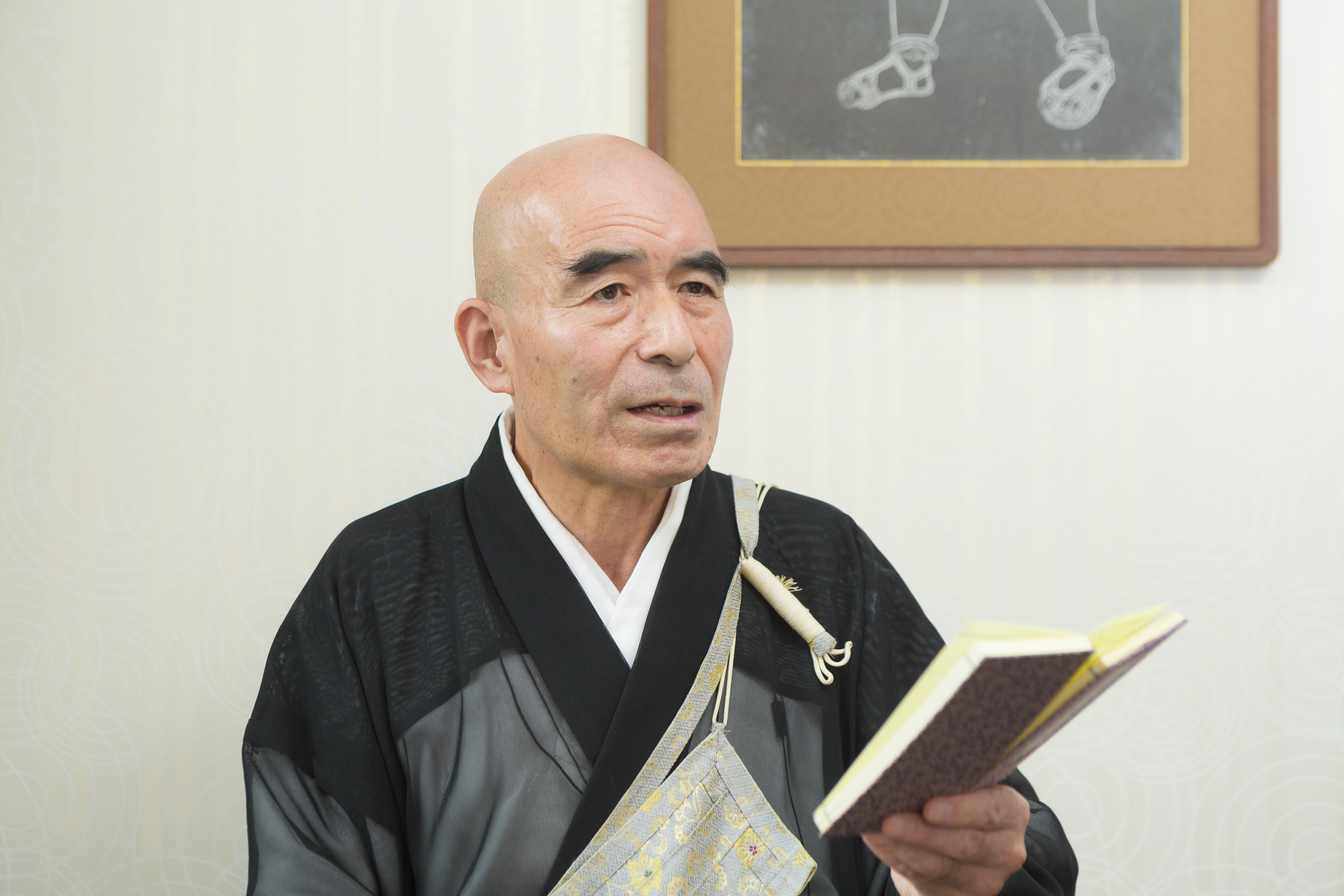 Master Kato Chouin, the head priest of Yakushi-ji temple, has been preaching Buddha’s teachings in sermons and lectures for 30 years.

Master Kato Chouin taught me about the special “before-food phrases” that monks chant before taking cha gayu. The temple has its own scripture relating specifically for this.

“This part, Shukuge, outlines Buddha’s teaching on food related topics. It’s stated that kayu (porridge) has ten benefits, such as enrichment of mind and body, fulfilment of long life, healing of thirst and hunger, or prevention of illness, and therefore administering kayu is equivalent to taking medicine. The following section, Taijiki Gokan (“The Five Contemplations”) states the five meal gathas: 1. Be grateful to the food in front of you, 2. Ask yourself if you have done virtuous conduct to deserve the food, 3. Take in the food graciously to keep your soul balanced and dispel evil thoughts, 4. Take in the food graciously as a medicine to nourish your mind and body, 5. Take in the food graciously to fulfill walking the path of Buddhism. The bedrock of all these teachings is the consciousness of gratitude toward cha gayu and all kinds of meals.”

The texts illustrate the inseparable relationship between temple and cha gayu culture. When we get taste of cha gayu, it is said that we should be mindfully appreciate it whilst eating. The Buddha’s teaching resides in the food itself. 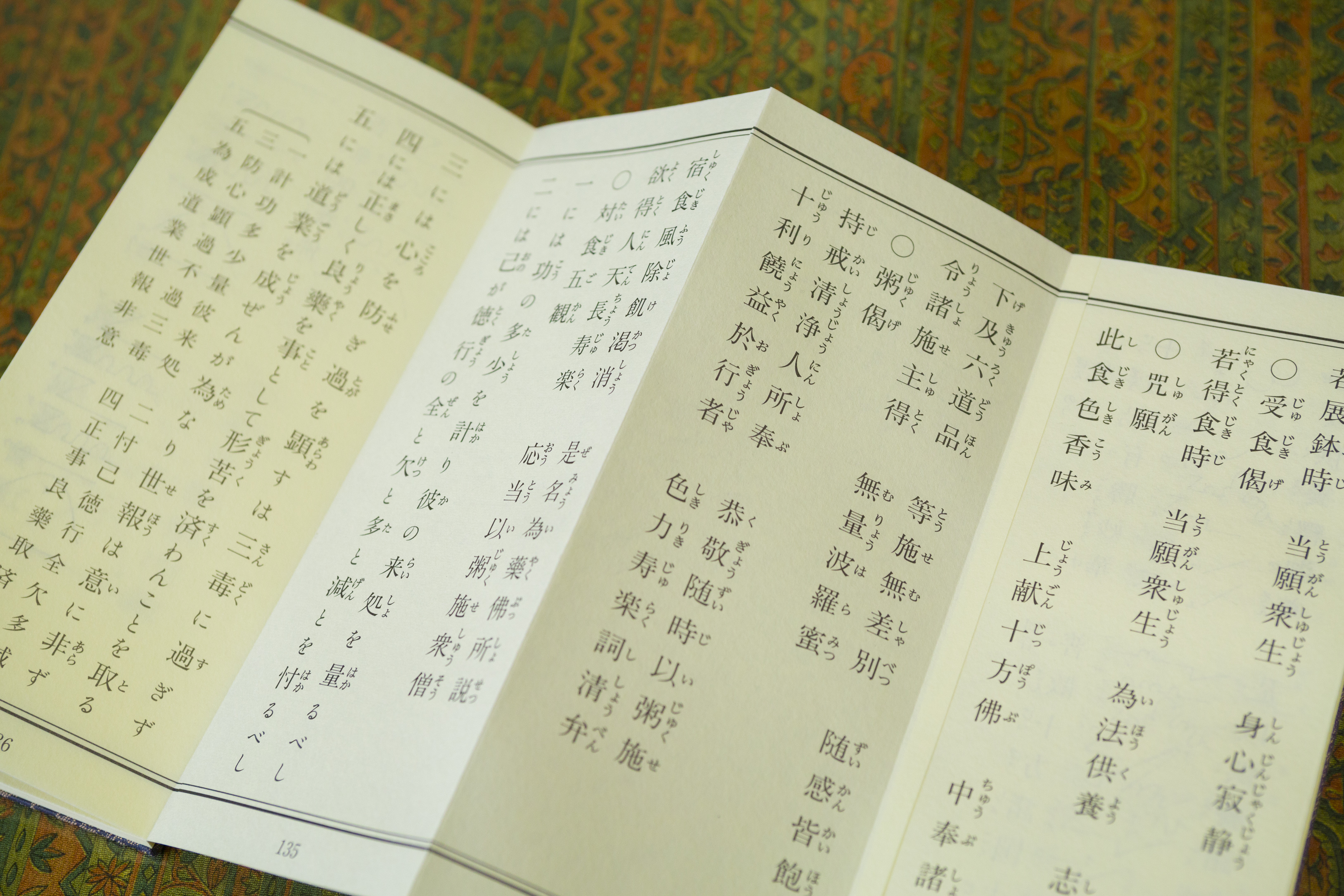 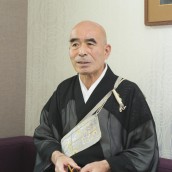 This Head Temple of the Hosso Sect was built in 680 A.D. by order of the Emperor Tenmu. Its East Tower, one of Japan’s national treasures, is currently undergoing dismantlement and repair, and is due for completion in Spring 2019.